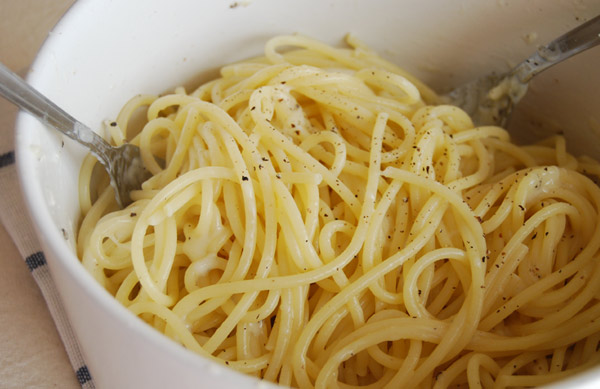 Cacio e pepe (cheese and pepper),  is a traditional dish from Lazio. In the ancient times shepherds used to go away for the transhumance for months with their livestock and, during those months, they used to carry preserved food that can be cooked easily: pecorino cheese, dried pasta and black pepper.

I’ve always thought that simple is best, and this is the proof! This dish is made with just three ingredients but it is incredibly tasty and nutritious besides, after a couple of times, you will get used to it and the preparation will be easier.

You might think I’m crazy, but this is one of the most difficult dish I’ve ever made. It’s tough to get the perfect texture with the cheese, it depends on how it’s grated, how much is matured and how much cooking water you add. But don’t worry, the more you cook it the easier it gets. Some people use oil flavored with pepper, stir fry the pasta and then add the pecorino but, for me, the perfect way to make cacio e pepe is the following:

Step 1
Bring the water to a boil and cook the spaghetti.

Step 2
Drain the pasta, and remember to set aside a cup of cooking water.

Step 2
Put the spaghetti in a large bowl and add cheese, pepper and a little water. Mix vigorously and quickly until the cheese becomes creamy. Serve it hot. 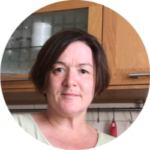 Graphic and webdesigner by trade, I’ve always loved cooking since I was a little girl. Here you will find healthy, plant based, mediterranean recipes to enjoy every day.

This website uses cookies to improve your experience while you navigate through the website. Out of these, the cookies that are categorized as necessary are stored on your browser as they are essential for the working of basic functionalities of the website. We also use third-party cookies that help us analyze and understand how you use this website. These cookies will be stored in your browser only with your consent. You also have the option to opt-out of these cookies. But opting out of some of these cookies may affect your browsing experience.
Necessary Sempre abilitato
Necessary cookies are absolutely essential for the website to function properly. This category only includes cookies that ensures basic functionalities and security features of the website. These cookies do not store any personal information.
Functional
Functional cookies help to perform certain functionalities like sharing the content of the website on social media platforms, collect feedbacks, and other third-party features.
Performance
Performance cookies are used to understand and analyze the key performance indexes of the website which helps in delivering a better user experience for the visitors.
Analytics
Analytical cookies are used to understand how visitors interact with the website. These cookies help provide information on metrics the number of visitors, bounce rate, traffic source, etc.
Advertisement
Advertisement cookies are used to provide visitors with relevant ads and marketing campaigns. These cookies track visitors across websites and collect information to provide customized ads.
Others
Other uncategorized cookies are those that are being analyzed and have not been classified into a category as yet.
ACCETTA E SALVA
Powered by